After Coimbatore, Conservationist Has Sights On Rest Of State.

People in Madurai will Pre see a middle-aged man going around setting up cardboard nest boxes in various parts of the city Coimbatore’s most successful sparrow conservationist. B Pandiyarajan, is now planning to spread his wings to save the bird's population in neighbouring districts too. Pandiyarajan says his Sparrow Conservation Foundation will extend its activities to the rest of TN “While we have been sending nest boxes to people in other districts on request, we want to visit the spots and install the boxes ourselves wherever there is a sparrow presence. “The organization, started by Pandiyarajan in 2013, has distributed more than 2,000 boxes, covering 90% of the district. One of their first stops in their mission to cover the state is Madurai. “In around 1,800 of our 2,000 nest boxes, sparrows have laid eggs and hatched them,” says Pandiyarajan. He has also been invited by Madurai college to assist a few students who are doing a PhD in sparrow population. Not many know that Pandiyarajan, who visits colleges and schools to deliver lectures on the importance of biodiversity and impact of changing life styles on bird populations, is a Class V dropout.

“My knowledge from the Tamil books on environment, politics, history and governance that | have read,” says Pandivarajan, who left school to support his family A father of two teenage girls, Pandiyarajan, who works nine hours as a turner at a lathe factory, is a busy man. Last year, his foundation launched Project Sparrow, which works with the Coimbatore corporation, CUBE and Mahendra Pumps.“Earlier we had trouble getting permission to install nest boxes in government buildings. Through this project, the corporation gives us permission to access roofs of government buildings, and install the boxes,” says Pandiyarajan. “My girls are proud of me, especially when 1 get called to deliver lectures or when they see spar rows around our nest boxes.”Pandiyarajan noticed sparrows were disappearing before the millennium began. “In 2013, along with three others. I began making nests using empty card board boxes.

We slowly improved the design, making them more suitable and safer for the birds,” he says Pandiyarajan sets aside 2400 from his 215,000 salary every month to make the boxes, which are given free of charge His foundation has 15 members turners, auto rickshaw drivers and software engineers who set aside the same amount every month. “We make at least 60 boxes a month with the funds we collect.” he says.

MY GIRLS ARE PROUD OF ME, ESPECIALLY WHEN I GET CALLED TO DELIVER LECTURES OR WHEN THEY SEE SPARROWS AROUND OUR NEST BOXES Pandiyarajan | sparrow CONSERVATION FOUNDATION, FOUNDER 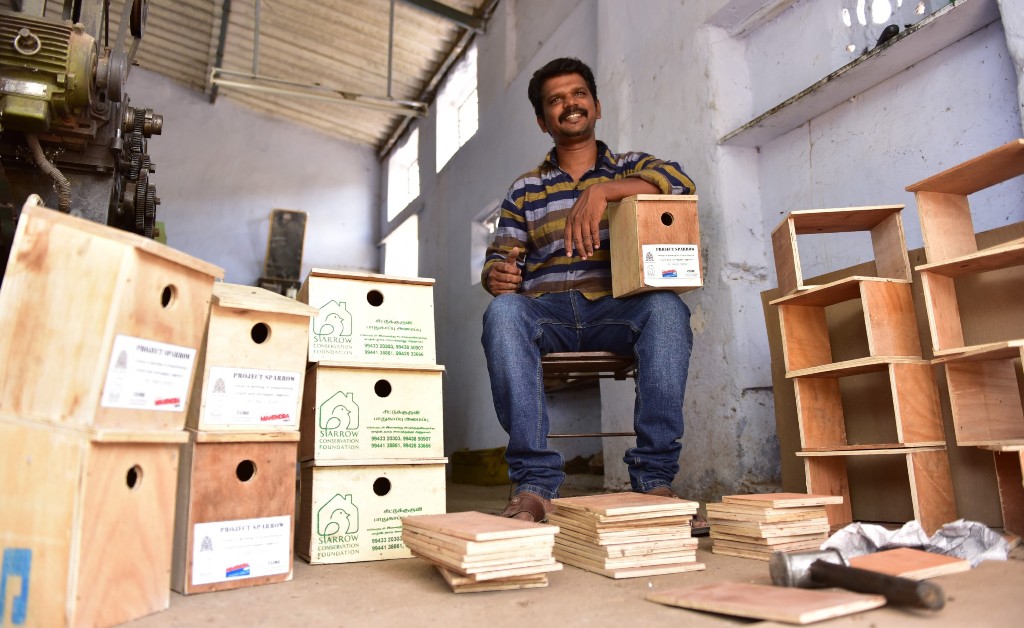 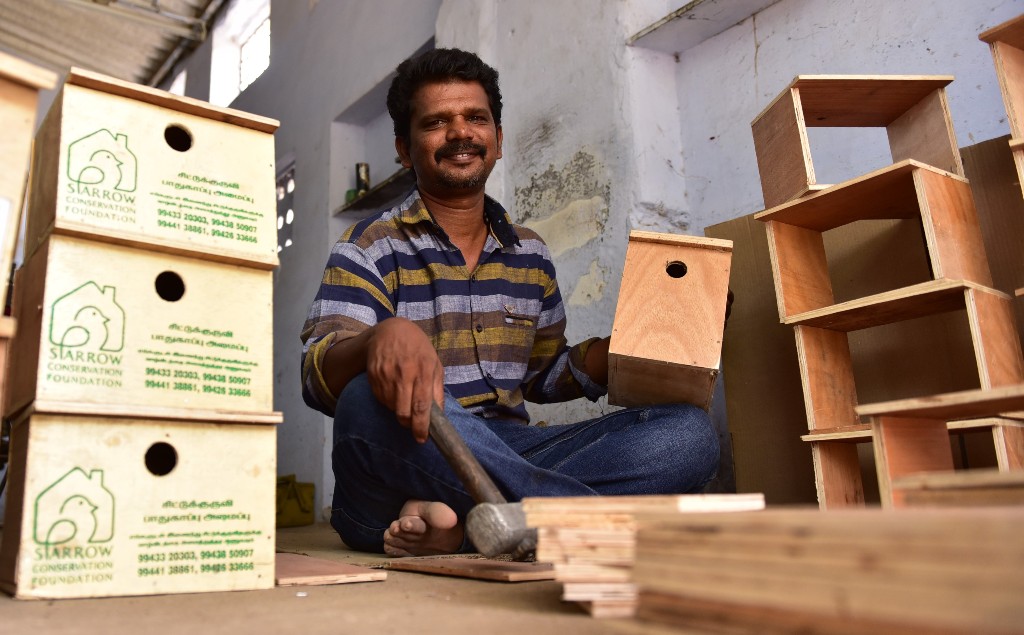 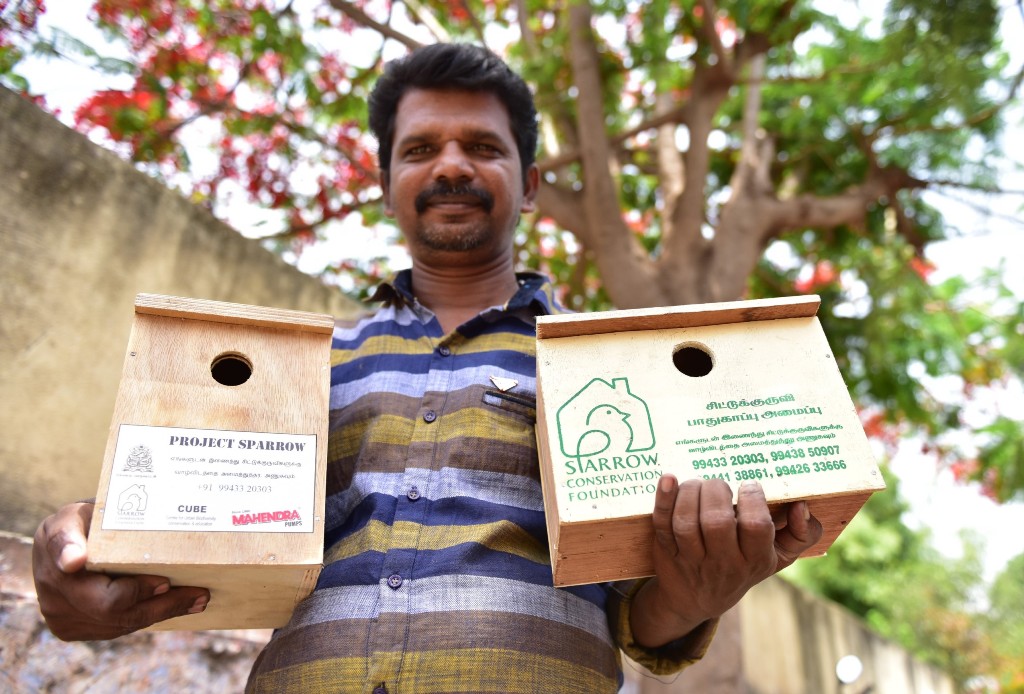 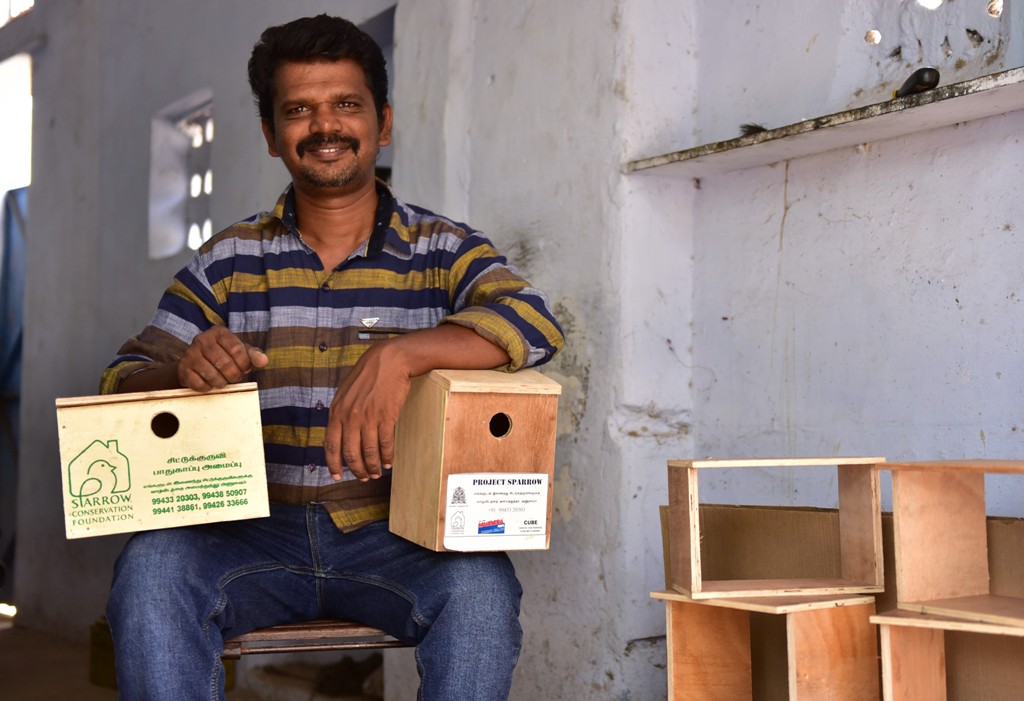